In Memory of Isabelle 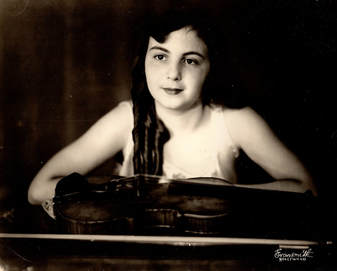 ​A violinist and a member of Local 802 for almost 30 years. A daughter, sister, friend and colleague, Isabelle was born in Illinois to Borris and Doris Daskoff. When she was a girl, her mother brought her and her little sister Bernardine to Los Angeles. Doris apparently harbored dreams of her daughters becoming child actresses and stars.

An accomplished seamstress, Doris established a dress shop near Paramount Pictures, where she made dresses for the Hollywood actresses – and for her own little girls.

Isabelle soon displayed musical talent. After graduating from UCLA, she joined the Los Angeles Philharmonic, then moved to New York, where she became a longtime member of the New York City Opera. She married Ralph Samuels, a photographer from Manchester, England, and eventually returned to Los Angeles in the early 1970s. Here she became a respected member of the local recording, motion picture, television and concert orchestras.

She played in the recording orchestra for “The Simpsons.” (At almost every studio session, she would punctuate the proceedings with one, lady-like sneeze: “Tooo!”)
​
Isabelle was interested in the world around her. She had a keen mind and had strong opinions. She was a devoted sister to Bernardine, who called her by her middle name, Rosalie, and with whom she attended many concerts and shared time together in Marina del Rey.